5 Things you Probably Didn’t Know About Cocktails or Bartending

By the 1600’s people had a penchant for a cheeky alcoholic punch, but the cocktail is a far more recent creation.  Since summer is coming up, we thought you might want to know a bit more about the origin behind your favourite tipple.

The Word Cocktail has a Surprising Origin

The word cocktail might sound a little bit dirty, and it’s no wonder!  There are a few theories behind where it came from – but the most popular seems to be that originally it was slang for a “ginger drink”.  It would appear round about that time prior to the sale of a horse, the dealer would use a ginger suppository causing its tail to be lifted.  This in fact meant that a “cocked-up tail” meant a spirited horse.

We think of a cocktail as a mixed drink – and one of the first times that it was used in that context was way back in 1806.  A reader asked a question to a well-known New York newspaper.  The editor responded that it was a liquor, that is made up of spirits, sugar, bitters and water.  This is a fairly standard description of a cocktail that still applies today.

Jerry Thomas was the King of Mixology

Although Jerry Thomas wasn’t the first bartender in America, he was the first one to write a book about it.  He wrote “The Bartenders Guide” in 1862 that included some great cocktail recipes for bartenders.  This included classics that we all still enjoy such as Tom Collins and the Martini.  He did have his very own signature drink which was called the “Blue Blazer”.

There are Actual Bartender Olympics

Did you know there was such a thing as “flairtending”?  Think Tom Cruise in Cocktail – and you will know what we mean.  There are different levels of competitions where you can juggle your spirit bottles.  There are more serious events such as The World Class Club.  This is where mixologists and bartenders all over the world can submit their original cocktail recipes for bartenders.

Sean’s Bar has been around for over 1,110 Years

The Guinness World Book of records gave the accolade of Irelands oldest pub to Sean’s Bar in Ireland.  It was established around 900 C.E and was renovated in 1970.  They also claim that they are the oldest pub in the world, and nobody else has yet to challenge them on it.

We hope you have learned a little bit about the history behind cocktails! If you are looking for some quality fruit juice supplies for your latest invention – get in touch with us today.

We're not around right now. But you can send us an email and we'll get back to you, asap. 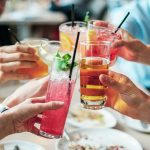 Why Gin Became Such a Trendy DrinkBLOG